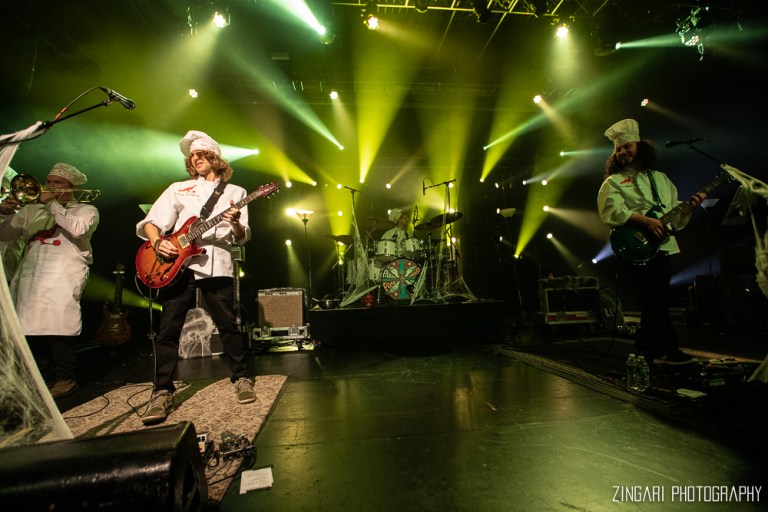 It’s hard to say, “Pigeons Playing Ping Pong” with a straight face. In the end, that’s sort of the goal of the band – to make its listeners smile. I attended their recent New Haven concert, the third and final stop of their Halloweekend precursor to their Fall tour, and I don’t think I stopped smiling for the entirety of their nearly three-hour set at College Street Music Hall.

Pigeons Playing Ping Pong is a funk-rock jam band from Baltimore, Maryland. The band made up of singer/rhythm guitarist “Scrambled” Greg Ormont, lead guitarist Jeremy Schon, bassist Ben Carrey, and drummer Alex “Gator” Petropoulos, has released four studio records and one live album, with a fifth studio album on the way. However, Pigeons Playing Ping Pong is not a band that can be fully experienced by the confines of a recording studio. The band pours every ounce of its energy into its live shows, which sometimes top 100 dates per year, and often until curfew.

As a jam band, the Pigeons have a wide variety of influences, from rock to funk to dance music. They frequently rotate covers into their setlist, and their Halloween run was no different. Titled “Stop Making Cake,” the set included five covers from the Talking Heads and three more from Cake, alongside 13 Pigeons originals. The band wore baker’s costumes on-stage, a nod to the “cake” element of the “Stop Making Cake” theme.

This created a unique vocal challenge for Ormont, an already eccentric frontman, to try and emulate the bizarre singing styles of David Byrne and John McCrea, whose voices range from deadpan speaking to high-pitched shrieks. Ormont handled the task capably, providing his own spin on the tracks and never removing his plastered-on grin during the performance.

It’s hard to say who the real “star” of Pigeons Playing Ping Pong is – all four members are supremely talented and feed off of each other without hogging the limelight. It’s hard to take your eyes off Ormont due to his magnetic presence, but if you take a while to look around the stage, everyone else is a marvel in his own right.

Schon is one of the best up-and-coming guitarists around. Every song in the set featured an impressive Schon solo, with some stretching 3-6 minutes. The band is at its best when it’s just jamming, and Schon can play to anything as a guitarist. His mastery of catchy, up-tempo licks and soaring solos make him a rising star.

Schon and Ormont wouldn’t be able to freestyle without a strong backbone though, and Carrey and Petropoulos are as steady a rhythm section as they come. The stage’s spotlights didn’t shine on them as much as the others, but they are a vital part of what makes Pigeons so great live. It’s impossible not to move at least some part of your body to the beat, and that’s a credit to the rock-solid Carrey and Petropoulos, who also nailed their respective bass and drum solos.

Pigeons’ set also featured some pleasant surprises. The band never plays the same setlist twice, and often weaves parts of songs into others. Upbeat opener “Bad for You” kicked off the night before the band played its first Cake cover, “Short Skirt/Long Jacket.” One of many songs to include horns from the band West End Blend, Pigeons was able to make the Cake single distinctly their own, much to the crowd’s pleasure.

The band played two aquatic-themed originals next, new favorite “Water” and 2017’s “Poseidon,” which also included a Talking Heads cover, “And She Was,” in the middle. Next up, the band dusted off “White Night,” a track from 2014’s Psychology that was only played live for the 14th time. The band also segued in another Talking Heads cover, “Making Flippy Floppy,” in the middle of “White Night,” before closing the first set with “Fortress” and then a sandwich of “Avalanche>Hem of your Garment>Avalanche.” The instrumental “Avalanche” was arguably Schon’s best moment of the night, where he jammed for over 10 minutes before intermission.

Pigeons took the stage again within 20 minutes and didn’t miss a beat. “Fun in Funk” opened the second set, with lyrics that tell you everything you need to know about Pigeons Playing Ping Pong (“We put the fun in funk”). Next, the band played Cake’s cover of Gloria Gaynor’s 1978 disco hit, “I Will Survive,” which was equal parts unexpected and enjoyable.

The band segued right into concert favorite “Time to Ride,” and then into Talking Heads deep cut “Cities.” Next came an instrumental jam, “The Hop,” before the band invited the horn players back out onstage for 2014 hit “F.U. (N.K.),” which sent the sold-out crowd into hysteria. After dropping “Moon Rocks,” another Talking Heads cover, into the middle of “F.U.”, the band performed its latest single, “King Kong,” which featured a fun crowd sing-along and another strong Schon solo.

Pigeons closed their second set with another classic, the funky “Zydeko,” which also contained a memorable cover of the Talking Heads’ biggest hit, “Once in a Lifetime.” Although fans came to the show to hear Pigeons Playing Ping Pong, their chops covering several diverse artists made for an unpredictable show.

Of course, what show would be complete without an encore? With just seven minutes to go before curfew, the band filled their entire time with the instrumental “Schwanthem,” which was the perfect way to cap a thrilling performance, featuring one final showcase for each of the band’s members.